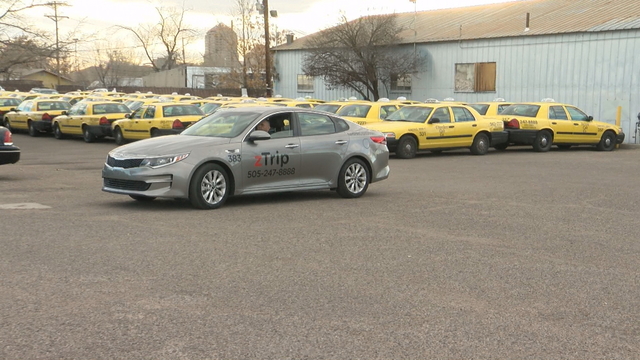 ALBUQUERQUE, N.M. (KRQE) – Albuquerque’s oldest cab company is making a big change to try to take back some of the business that’s shifted to ride-sharing services over the last few years.

The old “Yellow-Checker Cab” company was recently bought out by a new owner that’s renamed the taxi business “zTrip.”

The new owners are positioning themselves as a so-called “better choice” by combing elements of traditional taxicab services with those of ride-share services.

“We like to bill ourselves as the perfect hybrid between a rideshare vehicle and a taxi cab,” said Bill George, President and CEO of zTrip.

Over the last few months, George’s company has been buying up old taxi businesses across the U.S., including Yellow-Checker Cab in Albuquerque. So far, zTrip is now in 19 U.S. cities across states like Colorado, Texas, Kansas and Florida.

An old fleet of cars is just one of the reasons some people say they’ve turned away from traditional cab services in recent years.

Others have complained about the comfort and price of old cabs.

“It’s just charging you while you’re at a red light, so the meters going up,” said Jessica of old-style cab service.

Meanwhile, ride-sharing services like Uber and Lyft have taken off in popularity in the metro area. Those services hire local drivers to use their own private cars to give rides. With Uber and Lyft, customers can only get a ride through their use of a smartphone app.

“We want to be a better choice from the safety aspect, from the insurance aspect,” said George.

The company says it screens and hires all zTrip drivers. The company also owns the entire fleet of cars used for rides, including handicap accessible vehicles.

People can also call zTrip directly to book a ride, or hail a driver from the side of the street.